Despite being labelled a ‘new signing’ by José Mourinho after his impressive performance as a striker against Burnley at the weekend, rumours of an Anthony Martial departure from Old Trafford have reemerged.

You’ll remember that his agent made Sevilla’s interest public in the winter, and now France Football claim that Lyon are considering making a loan offer for the Manchester United forward in the summer.

With the likely departure of Alexandre Lacazette come the end of the season, the Ligue 1 side will be in dire need of a new marquee signing, and bringing Anthony Martial back to the club that developed him is one of the potential solutions. 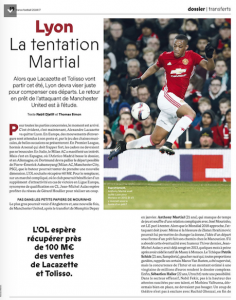 The interest isn’t new, however, with La Gazette des Transferts touting the move back in December for January, at a time when Martial’s stock at the club was at its lowest.

Even then, the whole thing remained a long shot.

The striker himself is said to be considering a loan move away from Old Trafford, but if he can build on his performance against Burnley and continue to impress Mourinho, leaving would be out of the question.

The ball is firmly in Martial’s court at this moment in time, and only his attitude on the pitch will decide whether or not a transfer could take place this summer.

Our bet is that he will be a Manchester United player next season.