Things have been relatively quiet on N’Golo Kante potentially renewing his contract with Chelsea.

The World Cup winner has a contract with the Blues lasting until June 2021, so whilst there’s no reason to panic for Chelsea, getting a new deal signed and that date extended is the wise thing to do right now.

French newspaper L’Equipe have a look at the player in their Thursday edition, and after going over all the Football Leaks claims, they explain PSG’s hopes of signing the midfielder are further fading.

Not only would there be a huge transfer fee, there’d be commission issues, it’s not thought Kante is especially keen on living in an area where he has so many old contacts, and now there’s a new contract on the agenda.

L’Equipe say discussions have started on a renewal and ‘these should end in the coming weeks’, that will result in Kante, who wants to stay at Chelsea, receiving ‘one of the 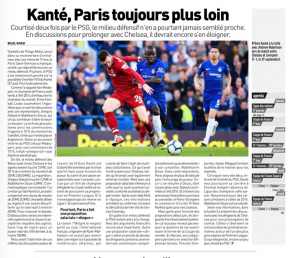 biggest wages in the Premier League’.

A renewal being announced soon would surely be a boost for Maurizio Sarri’s side as they continue their good start to the season.