Manchester City face PSG on Tuesday evening in a match being seen as the biggest in Europe this week.

The French press have been covering the game almost as if it was a big knockout tie, and that’s because it gives a big opportunity for Mauricio Pochettino’s front three to shine on the biggest stage.

PSG are nine points ahead of second placed Lens in Ligue 1, yet the general consensus is they haven’t really been shining to get there. Tuesday’s edition of L’Equipe has several articles ahead of tonight’s match, with one of them concentrating on that superstar attack of Lionel Messi, Kylian Mbappe and Neymar, and they say ‘the Parisian stars are able to sparkle so hard they would dazzle a blind man’.

All three are expected to start, despite Messi recently suffering from a slight knee issue, however, it’s in nets that there’s a surprise awaiting.

Keylor Navas has been the regular goalkeeper for PSG this season, with eight appearances to Gianluigi Donnarumma’s two, yet L’Equipe, leaning partly on Italian 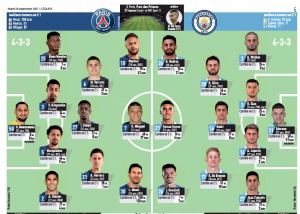 Some tensions have been appearing in the background, explain the French newspaper, and therefore Pochettino is now set to alternate his goalkeepers.