Antonio Conte taking over at Tottenham Hotspur this week has seen endless rumours about transfers.

There’s claims the manager has been assured of figures between €100m and €280m in the coming windows, with the latter figure just not seeming realistic.

Several top Serie A players have been linked, some who would come with huge price-tags and the wages to match. Alternatively, Fabio Paratici and his new manager may well be looking at players they can recruit for less than the real superstars.

First up is Wilfried Singo, a 20-year-old who can play right-back or higher up the pitch, so perfect for Conte’s wing-back role. The manager has been following him for a while, and will likely have seen Singo’s 12 appearances so far this season.

Then there’s Gleison Bremer, a 24-year-old central defender who has been linked with multiple Premier League clubs recently. With a contract expiring in June 2023, questions are obviously beginning to build about the Brazilian’s future. 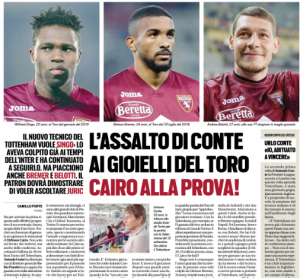 Last, but certainly not least, is Andrea Belotti, and his Torino contract expires at the end of this season. At 27-years-of-age, the striker could be a good option, given that if he’s signed on a free transfer there’d still be the opportunity to sell him back to a Serie A club should he fail to impress.