Barcelona are reportedly trying to place Philippe Coutinho at another club in order to save on his salary, despite Ronald Koeman saying he wants to count on the player

The 29-year-old starred for Liverpool in the Premier League, which convinced Barca to invest €120m plus bonuses to acquire his services in January 2018.

Having struggled at the Camp Nou, a return to England has been frequently discussed. However, Koeman insisted the attacking midfielder is in his plans for this season.

In today’s edition of the newspaper, Mundo Deportivo journalist Lluís Canut explains there’s ‘reasons to be believe in Coutinho’.

Prior to sharing his views, Canut says the Merseyside club made an attempt to sign the Brazilian in the ongoing window. The journalist claims Coutinho ‘has been probed by Liverpool, to live a second stage’ at Anfield.

He adds Koeman was an admirer of the player when he was managing Southampton and Everton. 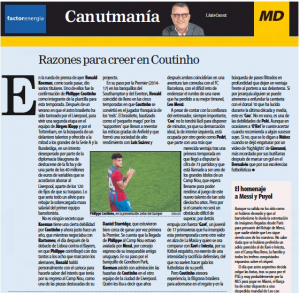 Despite having the manager’s confidence, it’s said Coutinho will ‘not have it easy’ to enjoy more playing time this season due to competition in the squad.

Canut’s claims of Liverpool probing to sign Coutinho come as a surprise, given the idea has been met with repeat denials.