Leeds United completed the signing of Illan Meslier from Ligue 2 side Lorient on deadline day of the Championship window.

The goalkeeper arrived at Elland Road on a loan deal and the Whites have the option to make the move permanent next summer.

French newspaper Ouest-France interviewed the 19-year-old and asked about the youngster’s decision to join Marcelo Bielsa’s side.

“It’s a legendary club and England is always attractive. Football is a religion here. There are 35,000 supporters in every match, it’s box-to-box, but they play really well. I wanted to move there one day and I found a more interesting project than in Lorient. I went for it,” he said.

Last season, he featured regularly for the French club, ahead of experienced stopper Danijel Petković. However, the situation changed for the 19-year-old in the summer when Lorient signed Paul Nardi.

Meslier wasn’t initially aware he had lost his place at his parent club and admitted it would have been better if things were handled better.

“I knew it the day before the match against Paris FC [first tie]. During the preseason, the coach [Christophe Pelissier] told me he was going to take a goalkeeper to replace Danijel, but at no time did he tell me if he was going to be a number one or two,” the Frenchman added

“So, we go through several states when we announce this to you. We need to digest, figure out what we’re going to do.

“If I have one regret, it is that I learned so late that I was going to be number 2. I would have preferred to know right away that he [Pelissier] was looking for a number 1 goalie. And there would have been no problem.”

Meslier is a second choice keeper behind Kiko Casilla at Leeds and the former’s current situation is similar to one he had at Lorient. Despite that, the keeper still prefers to be at Leeds over the Ligue 2 side. 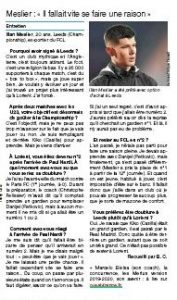 “That’s the goal [to play in the Championship], but I cannot say too much about whether I’m going to play or not. I am a substitute and behind Kiko to learn. But I have just arrived,” Meslier explained

“I knew that Kiko was a great goalkeeper, who has been through Real Madrid. So, if you’re going to be behind a goalie, you might as well be a very big one.”