Belgium face Switzerland in the UEFA Nations League clash at Swissporarena on Sunday.

According to Het Belang van Limburg, Roberto Martinez had to make last minute changes to his squad due to visa problems for Yannick Carrasco, who plays for Chinese club Dalian Yifang.

It’s now claimed the former Wigan Athletic manager has decided to include Liverpool’s Divock Origi as the 25-year-old’s replacement in the squad for the last international fixture of this calendar year.

It’s ‘surprise’ for the former Lille man as he receives his first call-up from the national team after 235 days. The Reds forward last represented his country in a friendly tie against Saudi Arabia earlier this March.

Under Jurgen Klopp, the 23-year-old has struggled for minutes and has made only one appearance this season as he was not included in De Rode Duivels’s World Cup squad. 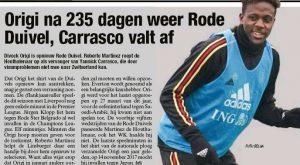 Even Origi would have not expected to be selected for the Belgium squad after limited playing time, but this latest surprise should do well for his confidence.