Watford have been impressive in the Premier League this season, having won all four of their games so far, including a 2-1 victory over Tottenham Hotspur.

Mauricio Pochettino’s side enjoyed more than 60 percent of possession at Vicarage Road, but that was not sufficient to stop the Hornets from coming from behind to beat the north London club before the international break.

Spanish newspaper El Pais interviewed Javi Gracia and the former Malaga manager explained how impressed he is with Spurs’ game, and talks about the evolution of the top flight club competition in England.

“It seems to me that English football has a very high level. You see Tottenham and they have a game that, besides being very competitive, they’re super rich in options. Their playmakers change their positions frequently,” the 48-year-old said.

Gracia has previously managed in Spain, Greece and Russia before taking the job at Watford at the start of this calendar year.

The top six clubs of last season had managers from different countries and the ex-Malaga boss stressed that having coaches with various ideas and backgrounds makes Premier League clubs more challenging to manage than in other leagues.

“I do not know if it is more difficult [to manage]. Yes, it is a more varied league. There are many different influences from coaches and players that has an impact on the game. It is a very rich league not just economically, but also tactically,” he said. 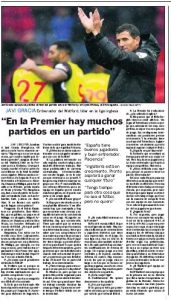 “In each game there are constant modifications of the game system. A team plays with three centre-backs and suddenly revert to back four. There are times when you play long balls or when you are looking for the second pass, while in other leagues, there is more pause. There are many matches within a match.”