After signing Mathias Zanka from Huddersfield Town, Fenerbahce are still in the market for another central defender and Fanatik claim Nottingham Forest’s Yohann Benalouane is a target for the Turkish club.

It’s reported that along with former Marseille defender Adil Rami, Fenerbahce are considering the Tunisia international and could make an offer for the player.

Fanatik haven’t given any information whether this would be a loan or permanent deal but they say Fenerbahce are closely following the situation with the Nottingham Forest player.

The former Leicester City defender joined the Championship side at the start of the year, and made 14 appearances for the club last season. 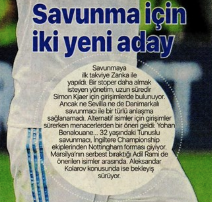 The 32 year old has missed Nottingham Forest’s first two games due to suspension but he may play an important role for Sabri Lamouchi’s side in the coming months.

Benalouane has one year left on his contract with his club despite recent reports he was going to extend his stay at the City Ground.