Fotomac claim Fenerbahce assistant Volkan Demirel watched Norwich City striker Teemu Pukki in action against Greece last week and was left impressed with what he saw from the Finland international.

Pukki made an excellent start to the Premier League campaign with Daniel Farke’s side but his form has slipped recently, just like that of his team.

However, Fotomac report Fenerbahce are interested in signing the 29 year old and that they’ve added him to their shortlist ahead of the January transfer window.

According to Fotomac, the former Celtic striker could partner Vedat Muriqi in the second half of the season, and Fener will begin their operation to sign the Finn next month.

Despite the Super Lig side’s interest in the attacker it’s unlikely Norwich City will want to lose a key player midway through the season. 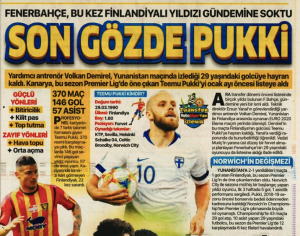 Pukki’s last Premier League goal came in the mid-September victory against Manchester City and he’s not scored in the last seven games.

His contract at Carrow Road will expire at the end of June 2022.