Sunderland have apparently not taken Andreas Samaris off their list of targets.

The Black Cats got close to finding a deal to sign the player from Benfica last January, but a late attempt to drop the price or get a loan move ended up killing the transfer.

During the past few months, the Portuguese press have repeated a Sunderland transfer is still possible in the summer, since the player is still on the transfer market. 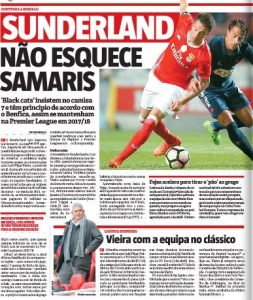 Now according to Record, Sunderland and Benfica have reached an agreement in principle for the player to move.

The newspaper claims David Moyes’ side would pay something around €20m for Samaris, which is the price Benfica have wanted all along.

The only condition for the deal to happen is that Sunderland must stay in the Premier League. Both because they would not invest that much money on a single player if relegated to the Championship, and also because the midfielder would only want the move if it it means Premier League football.

Claim agent could be making rumours about Chelsea talks up –...

Man United player about to become a father – Could affect...