Home Europe Sunderland player told to make decision if he “wants to be part...
SHARE

Wahbi Khazri joined Rennes on a season-long loan deal last summer, following Sunderland’s relegation to the Championship. The French club doesn’t have an option to sign the forward, but are keen on securing his services on a permanent deal.

Sunderland were relegated from the second tier club competition in the 2017/18 season and will play in the third division next campaign.

Khazri’s contract at Sunderland runs down in 2020 and he’s currently earning a gross salary of €180,000-a-month. The Black Cats will be unwilling to pay such wages since they dropped to League One.

According to L’Equipe, Khazri also is unlikely to return to his parent club as he does not fancy playing in the lower division of English football.

Rennes are looking to strengthen their attack since they have qualified for the Europa League. The Ligue 1 outfit are ready to hand the Tunisan international a three-year contract to join them on a permanent transfer. Rennes are awaiting for a response from Khazri before opening negotiations with Sunderland. 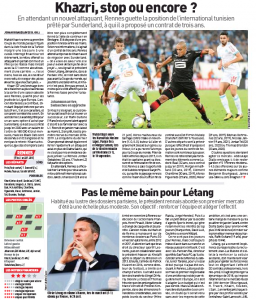 The French club’s president, Olivier Letang, wants a quick answer from the player whether he “wants to be part of the project”. L’Equipe claims Rennes are looking for a reply before the start of the World Cup. However, Khazri isn’t in a hurry to make a decision on his future.

Rennes are looking for a quick response from Khazri is because if the forward decides against joining them, then they have to look elsewhere in the transfer market to replace someone who was key for them last season.