We’re not 100% sure, but we think we might have found a mistake in Tuesday edition of Sport, and it’s quite an entertaining one, because according to the Catalan newspaper, Sunderland were among the clubs who tried to sign Barcelona’s Marlon.

This is by no means meant as a disrespect to the Black Cats, but considering the player was linked throughout the window with moves to West Ham and Newcastle, with the former even allegedly going as far as offering €20m for the centre-back, our guess is he was a little bit out of their league.

With Sunderland now in League One, something truly special would have had to happen for Marlon to be interested, and considering Newcastle failed to complete the move on transfer deadline day because the defender couldn’t get a work permit, it would have happened either way.

What we think happened here is that Sport meant Southampton, as the Saints did try and make a move for the Brazilian early in the transfer window. 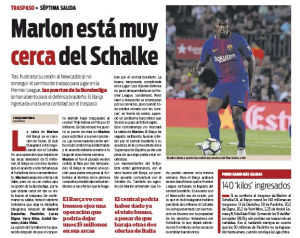 The same newspaper stated back in June that Mark Hughes’ side were very close to ‘closing the operation’, but that transfer clearly never went through since he’s still a Barcelona player.

While Mundo Deportivo believe Marlon could be on his way to Sassuolo, Sport now think Schalke, who are on the verge of losing Thilo Kehrer to Paris Saint-Germain, could be his best bet.

He just won’t be going to the Stadium of Light, sadly.