Over the course of January, Spezia’s M’Bala Nzola was the subject of interest from various members of the Premier League.

Newcastle, West Ham and Fulham were all said to be interested at various points, with all three clubs in need of a striker.

One club who wasn’t mentioned prior to this Monday, however, are Sunderland AFC, with Gazzetta dello Sport naming them alongside the Cottagers in an article.

Yes, we are fully aware that the Black Cats are currently in League One and a very long way off a return to England’s top-tier, but, at least according to the Italian newspaper, there was an interest in the Nzola.

Now, we’re not sure if Gazzetta have simply got Sunderland mixed up with a Premier League club, as these things can happen, but we simply can’t see the Stadium of Light residents, in their current situation, being after a player valued at around €15m.

They once were that type of club, but the last few years have seen them struggle more and more both on and off the pitch.

However, there is newfound hope a new ambitious owner in Kyril Louis-Dreyfus will help going forward, even if it could take some time to redress the situation. 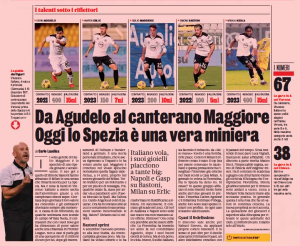 Either way, Gazzetta explain Nzola’s value is ‘growing day after day’ because ‘he has shown he can also be worth a call in the Premier League’, and ‘it’s no coincidence there is already a quotation of €15m for him after the interest of Fulham and Sunderland in January’.

You can see why we’re a little bit doubtful the paper actually meant to include the Black Cats here, with someone like Southampton likelier, and they just got mixed up.

Either way, that’s what the story says, but we just wanted you to know where it came from and what we thought about it, because it wouldn’t be the first time stuff like this slipped through the editorial cracks.