Now that Sunderland have been relegated to League One, just a season after dropping out of the Premier League, a quick fire sale is going to take place this summer to get the books balanced.

Among those extremely likely to find themselves a new permanent club is Wahbi Khazri, currently on loan at Rennes in Ligue 1 where he’s been having a very nice season.

Back in March when Sunderland still had a chance of remaining in the Championship, talk of a sale was already rife, with L’Equipe claiming a good World Cup could get the Black Cats up to €15m, which could drop to €4.5m if they ended up in England’s third-tier.

Well, if Le10 Sport are to be believed, that figure has dropped even lower these days, which would be great news for the likes of Marseille, who have been heavily linked with a move in the summer. 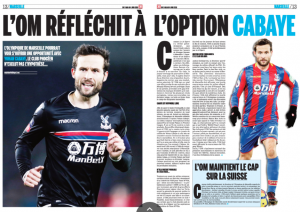 The French magazine state that Sunderland could sell for as little as €2m, a price which has also caught the attention of Lyon.

Both sides are also said to be interested in Hatem Ben Arfa, but Khazri, even if he’s not on a free, represents the safer bet, mostly because he’s actually kicked a football competitively this season, unlike the Paris Saint-Germain forward.