Home Championship Sunderland continuing to pay players €140k a month despite them not being...
SHARE

L’Equipe on Tuesday has a big feature looking at salaries earned at every Ligue 1 club, and Sunderland have jumped out a couple of times.

Khazri is spending the season on loan at Rennes and had such a good start to the campaign that that were rumours of a January transfer elsewhere, from which Sunderland could have made some money and got rid of the wages.

But that was impossible, because Khazri had already represented Sunderland this season before moving to Rennes on loan, so couldn’t represent a third club in the same campaign. 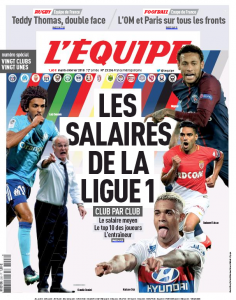 At Dijon the club’s top earner is Papy Djilobodji, with them paying him €60,000 per month.

However, Sunderland are paying an extra €100,000 per month on top of that.

That’s more than many Ligue 1 clubs pay any player themselves, and more double what the clubs towards the bottom of the table shell out.