Home Europe Sunderland can have target presented to them on a plate, for about...
SHARE

Back in the last summer, Sunderland were heavily linked to Benfica winger Eduardo Salvio.

It was said the Black Cats were alongside Milan in a tough competition for the player, as the Eagles were demanding €25m for the transfer.

Salvio ended up staying, and despite being useful for Benfica during the season, the club are again keen to sell in the next transfer window. According to Diário de Notícias today, the Lisbon side want to make money in the summer and will demand the very same €25m.

After turning down a couple of bids in January, Benfica have already told Salvio’s agent to look for the other offers, as clubs from England, France and Germany are said 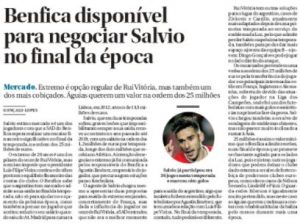 The newspaper claims this chase is mostly because of the player’s good form in the Champions League, where he got three goals and three assists.

So if Sunderland’s interest still exists, there’s a good chance to sign him now. Of course, David Moyes needs to save the club from relegation first.