Home Europe After summer claims of impending move to Everton, player quizzed on his...
SHARE

Everton fans certainly remember the summer links with Sporting midfielder Matheus Nunes, with many claims from the Portuguese media claiming the clubs were very close to agreeing a deal for the transfer.

At that time, Sport Witness managed to confirm there had been contacts for the move, even though the negotiations weren’t as advanced as the news suggested.

The rumours about Nunes’ exit from Sporting went quiet by the end of the transfer window, and were brought up again week, as the player held a press conference ahead of the Champions League clash against Borussia Dortmund.

“I know there was a lot of speculation but my focus was always at Sporting, playing the Champions League is always a very big attraction,” said Nunes (via A Bola). 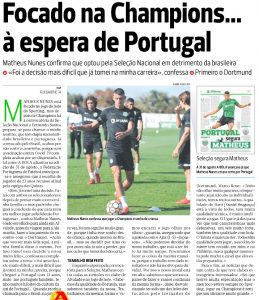 When quoting the midfielder, outlet Notícias ao Minuto points out only Everton as the club who chased him in the summer.

By August, a couple of reports from Portugal said Everton did not go for the signing because Rafa Benitez had ‘other priorities’ for the summer window.

Nunes was said to be available for around €20m at the time, especially because Sporting didn’t make any big sales during the window.