Corriere del Mezzogiorno, a newspaper local to Napoli, report Kalidou Koulibaly has his ‘suitcases ready’ to travel and sign for Manchester City as soon as he’s given approval.

It’s felt that way for some time, and the report states the defender’s desire for the move is turning more into an obsession with each day that passes. He feels he’s missed out on big transfers in previous windows and, aware there won’t be many more opportunities, doesn’t want to let the City chance pass.

Agent Fali Ramadani is expected to present the latest offer from Manchester City on Saturday, and it’s then that a decision needs to be made. Either Napoli accept, and let Koulibaly fulfil his dream, or they reject and face the huge gamble of not selling the player at all.

Koulibaly is said to be very fond of Napoli, yet that isn’t dilluting his desire for a move. PSG are also presented as keen, but the player is determined to sign for City, having reached a personal agreement with the club.

According to Corriere del Mezzogiorno, the agreement includes wages of €12m a season, 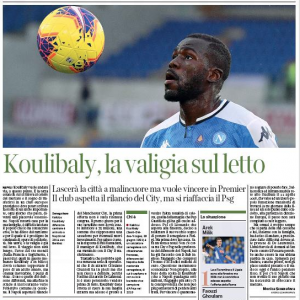 when bonuses are included. Italian newspapers usually quote wages after tax, however, that would make the sum appear inflated.

The transfer could potentially face a further delay, even if Napoli are receptive to whatever City offer. Aurelio De Laurentiis, the club’s president, tested positive for Covid-19 on Wednesday, so may not be available for negotiations.