A section of the Spanish media are unhappy with the possibility of Gareth Bale returning to Real Madrid following his loan stay at Tottenham Hotspur.

Last summer, the forward returned to Spurs on a temporary deal and Los Blancos were hoping his stay in north London would be made permanent at the end of this season.

AS now explain the Welshman ‘will return to Madrid’, where he still has a year left on his contract.

The 31-year-old joined Tottenham to feature regularly so that it improves his form and fitness for Euro 2020. Real Madrid, on their part, allowed him to go on loan to lighten their salary budget.

Although he’s been restricted to only 10 league starts, Bale has managed nine goals and two assists in 19 appearances. Injuries prevented him from featuring regularly this season.

The newspaper states: ‘The fears of relapse from one of his many muscle injuries did not go out of his head. To avoid them, the Welshman drew up a training plan by which he did not exercise more than three days a week and one of them was taken advantage of to do recovery work. In addition, his obsession with control of his body made him exclude any speed exercise in workouts.’

AS further add Bale was ‘not attracted to the idea’ of playing three games in a week, something, they point out, he has hardly done this season.

They further criticise him for not stepping up in big matches, even though it was the manager’s decision not to hand him a place in the starting XI in those matches.

Within the dressing room, AS explain the player has ‘not hidden his intention’, to ‘measure his physical condition to the limit’ and always putting Euro 2020 ‘first’. 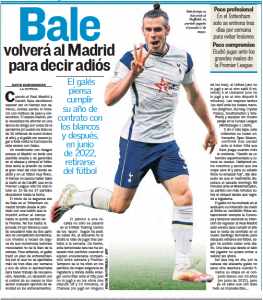 He also not ‘hidden’ his desire to return to Real Madrid, where he wants to fulfil his final year of contract and then retire from football.

AS then follow it up by stating: ‘An idea that the player does not want to evaluate for now. So today, no other adventure passes through the head of the Welsh attacker when he ends his stage in the white team [Real Madrid] at 33 years old (in June 2022), but it is already known that with Bale everything is unpredictable…’