When Pierre-Emile Højbjerg signed for Southampton from Bayern Munich, it was a genuinely exciting move.

Højbjerg was very highly rated around Europe and the feeling was he’d take a step backwards before making Bayern regret ever letting him go. A string of interviews in Denmark only served to underline the impression that here was a special footballer.

Speaking so well about the game, and certainly beyond his years, Højbjerg sounded like a club and national team captain in the making.

It didn’t quite work out, not to begin with anyway, and whilst the 22 year old may now be getting more time on the pitch at Southampton, he’s been edged out of the picture with the Danish national team.

Denmark manager Åge Hareide has been speaking to Jyllands-Posten and made it clear he feels there’s an attitude issue with the player.

“Pierre Emile Højbjerg has his own thoughts on how to do things, and I wasn’t happy,”  Hareide explained.

Ahead of a match against Montenegro, Højbjerg made clear his disagreement with team selection. 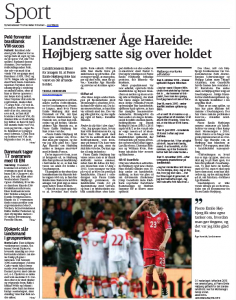 “I asked him who he wanted to demonstrate for and what he would achieve with that? Are you dissatisfied with your teammate who gets on the pitch? You can be angry at me, but you should not show it. That can only be said to me.”

Hareide explained this was also a problem at Bayern Munich where, despite the incredibly tough competition for a midfield place, Højbjerg didn’t hide his annoyance when not picked.

And it’s something the national manager feels has continued in England, telling Jyllands-Posten: “He’s a young player, and has done exactly the same in Southampton. He’s had the same problems over there.”