On November 25th, Cope reported Paul Pogba had recovered from injury and the reason he wasn’t featuring was because he doesn’t want to play for Manchester United again.

It was also claimed the midfielder wanted to force an exit in January.

A certain section of United fans believed the France international’s display against Arsenal on September 30th was his last appearance for the Red Devils.

However, the suggestion was dismissed when he came off the bench in his side’s 2-0 defeat to Watford last weekend.

Speaking about the 26-year-old, Ole Gunnar Solskjaer said: “Paul has this quality, and a quality that few midfielders have in the world. He’s a great player who you want to see his best football with Manchester United. We just need him to be fit and available.”

L’Equipe claims the English club’s manager made these comments mainly because it’s true, but also because there’s another reason behind it.

It’s about not upsetting Mino Raiola, who is also an adviser for United target Erling Braut Haaland. 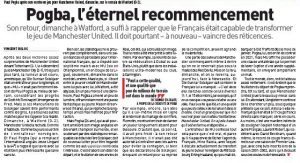 Solskjaer and Manchester United are currently discussing signing the Red Bull Salzburg star in January. RB Leipzig and Borussia Dortmund are also interested in the 19-year-old, along with Juventus.

Whether Solskjaer’s decision to please Raiola can help United land Haaland remains to be seen.