There are countless stories about the club’s interest in various players, mainly Sporting midfielder Bruno Fernandes.

Earlier today, we covered Record’s big story about City being keen on both Bruno and Benfica youngster Joao Felix.

Record don’t believe a meeting is being held in Manchester, but A Bola continue to claim otherwise.

The headline reads: ‘Hugo Viana in Manchester with Jorge Mendes’

A transfer is now being taken so seriously that it’s suggested Bruno’s ‘final game’ for Sporting could be the Portuguese Cup Final.

A Bola insist that, according to their own information, Sporting director Hugo Viana travelled on Thursday to Manchester. He wasn’t alone, being accompanied by Jorge 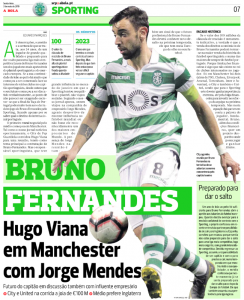 Mendes, which would of course take everything to a more serious level.

Bruno’s €100m clause is said to be ‘purely indicative’, so a reduction is likely.