SportBild and Bild are going big today on Borussia Dortmund interest in Wilfried Zaha, looking ahead to the summer transfer window.

The Bundesliga side are said to want to sign the 26 year old as a replacement for Christian Pulisic, who will be leaving for Chelsea at the end of the season.

Dortmund are getting €64m for the US international, and that gives them some renewed spending power. Thorgan Hazard has been the player linked most, but Zaha is presented as another possibility.

In their magazine this week, SportBild say that talks have been initiated on a potential deal, and it’s explained things go back to last summer. 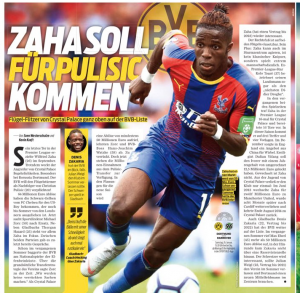 It’s claimed that back then Crystal Palace said the player would cost €50m, something BVB felt too big at the time. Now with the Pulisic money, things are rather different.

Zaha certainly isn’t the only option, and whilst it’s suggested €50m would be the place negotiations start again, it’s likely Dortmund would try to push that figure down.