Riqui Puig has emerged as a January transfer target for Arsenal, if reports coming out of England are to be believed.

The Athletic reported the Gunners are looking at several creative players ahead of the winter market and believe the Barcelona player can help Mikel Arteta solve his side’s creative problems.

Reports in Italy have credited AC Milan with an interest in the 21-year-old, who has had issues with Ronald Koeman.

Puig has seen his playing time limited as he has managed only 79 minutes of action across five matches in all competitions. He is yet to start a match for the Catalan club this season.

His situation at the Camp Nou has drawn attention from the north London club and the Serie A side, and the claims made in England and Italy are relayed in today’s edition of Mundo Deportivo.

The newspaper also provides the La Liga giants’ stance on the midfielder, most likely for the January window. 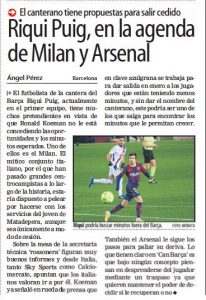 According to Mundo, Barcelona are ‘clear’ that ‘under no circumstances’ are they thinking of getting rid of Puig in the upcoming window through a permanent transfer.

Barca want to ‘maintain the power’ to decide whether or not to ‘recover him’.

This would suggest Koeman’s side are in favour of allowing Puig go out in January, but on a dry loan deal.