On Thursday, the day after deadline day, La Voix du Nord, the regional newspaper for the Lille area, reported Everton had made an offer for Adama Soumaoro.

It was claimed a €22m approach came in from Everton towards the end of the January transfer window, and Lille immediately knocked it back.

The French club are in very serious financial difficulties which could even carry the threat of automatic relegation if they don’t sort it out, so turning down big fees is something of a gamble.

Claims of Everton interest, and a big offer, had somewhat come out of blue, but it suggested Lille value the 25 year old central defender highly ahead of a possible move in the summer.

L’Equipe have an interesting take on things this weekend, and state the Everton offer may have been completely fabricated in order to given the impression Lille are sitting on valuable assets, and therefore help the club with a new round of investment.

Under a sub-header reading ‘Have some players really been the subject of an offer?’, L’Equipe state: ‘How did the owner manage to convince his investors? By making known that the market value of some of its players will allow the Dogues to recover a financial capacity in the short term. 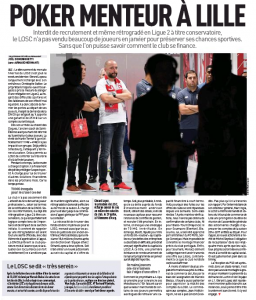 ‘That’s why leaks on club offers have been spreading for a week. Are they real? After many checks, we did not get confirmation from some clubs. Neither for Ballo-Touré (Mainz) nor for Soumaoro (Everton). Bissouma was approached by FC Porto coach Sergio Conceicao, but it’s impossible to know the precise financial arrangement of the Portuguese club. Finally, for Soumaré, Monaco categorically denies having sent an offer to Lille, contrary to what the North club continues to say.’

That sounds like an almighty mess, and suggests Everton haven’t actually offered €22m for Soumaoro, they may not have offered anything at all.