Manchester United’s long chase for Jadon Sancho came to an end after they reached an agreement with Borussia Dortmund earlier this month.

Ole Gunnar Solskajer’s side wanted Sancho last summer, but their failure to sign him in 2020 forced them to look at other players, including Ousmane Dembélé.

The Barcelona player will be out of action for four months after coming off with an injury during France’s 1-1 draw against Hungary on June 19th.

Dembélé has entered his final 12 months of contract at the Camp Nou and the injury will only make it more difficult for the La Liga side to place him on the market, if he decides not to sign an extension before the window closes.

Mundo Deportivo journalist Lluis Canut explains Barca technical secretary Mateu Alemany is negotiating a new contract with the 24-year-old, while he recovers from the setback he suffered last month.

The journalist also explains that Manchester United and Juventus continue to follow the Frenchman. 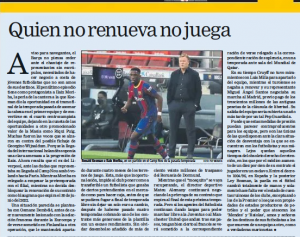 According to the report, Dembélé’s agent could decide to delay contract negotiations with Barca so that his client can join either the Red Devils or Juve on a free transfer in 2022.

Should this happen, then Camut states that Ronald Koeman’s side will relegate the player to a substitute’s role next season, and this could hamper Dembélé’s chances of representing France at the 2022 World Cup in Qatar.