Emiliano Martínez has been at Arsenal for a decade now, but had to wait until the end of the last season to feature regularly for the Gunners.

The 27-year-old was handed a chance to start after first choice goalkeeper Bernd Leno suffered an injury in his side’s June defeat to Brighton & Hove Albion.

Martínez impressed with his performances and this included fine displays in the FA Cup semi-final and final victories over Liverpool and Chelsea respectively.

During his time at the Emirates, the Argentine has been out on loan on six occasions. The keeper stressed his long journey with the north London club hasn’t been an easy one.

“I came to Arsenal in 2010 and had to go through five loans, plus another [one], playing just one game, at Oxford. It wasn’t easy, really. It cost me and I suffered more than I should, but today I can say that all the effort was worth it,” Martínez was quoted as saying by AS.

“The last [loan spell] one, at Reading, was the one I enjoyed the most. Coach José Gomes gave me a lot of confidence. And I grew a lot.

“If I’ve been back so many times, it’s because they kept trusting that I could be their number one. If they had told me ‘look, you have no future here’, I would have gone to another club. Now what I wanted has been achieved, and I hope to continue succeeding at Arsenal.”

There’s no clarity if the South American will continue to be the new No.1 or if Mikel Arteta will start Leno regularly. 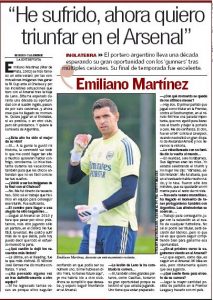 Martínez had earlier suggested he will leave Arsenal, if he has to settle for a place on the bench. The custodian has now again hinted his continuity with his current employer will depend on featuring regularly next season.

“What I hope, as I said, is to stay at Arsenal. My idea is that, but obviously I want it to be [by] playing [matches],” he explained.