On December 24th, we carried a report from Mundo Deportivo, who claimed Barcelona have submitted a proposal for Frenkie de Jong and the terms offered in the deal is what the midfielder’s agent Ali Dursun had asked for.

It was also claimed the 21-year-old liked the offer made by the La Liga winners and it is now down to him to select which offer seduces him the most as there are other clubs interested in his services, including Manchester City.

A ‘Top Secret’ report from Mundo Deportivo has an update on De Jong’s compatriot Matthijs de Ligt, who is also on the radar of Barcelona and several other clubs.

It’s claimed the Spanish champions have cooled down their interest in the defender because his agent Mino Raiola will take him to a club next summer who will offer him better wages. It could be Juventus, Bayern Munich, PSG or any other side.

The Catalan newspaper claims the Camp Nou outfit are unwilling to meet the Ajax star’s demands and they have no intention of getting into a battle with other clubs for his signature.

Should they decide to pay better wages to De Ligt than De Jong, it may not please the latter and his camp, especially when they already liked Barcelona’s proposal. 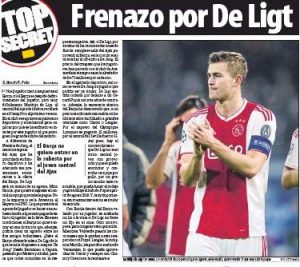 Mundo says if the 19-year-old wants to join the Blaugrana, then they will offer similar wages to what they are planning to offer the Netherlands midfielder.

If he decides against accepting it, Barcelona will look elsewhere in the market because they will not meet Raiola’s demands.