PSV Eindhoven have a ‘strong suspicion’ that Arsenal will make a move to sign forward Cody Gakpo this summer.

That’s according to Eindhovens Dagblad, who say the Dutch side will be more than open to a transfer if their asking price is met.

Those numbers have seen interest in the 22-year-old ramp up, with Liverpool, Manchester City and Arsenal all said to be keen.

ED cover the player’s future and state that it is ‘assumed’ that Gakpo will break PSV’s transfer record but who will get him remains to be seen.

They say that while somewhere like Transfermarkt have him valued at €25m, the likelihood is that he will ‘leave for much more money’ if ‘no crazy things happen’.

According to them, a fee in ‘excess of €40m’ and thus a record for PSV seems ‘absolutely feasible’ given the names which have been involved. As far as Gakpo and PSV are concerned, there will be bids that ‘simply cannot be refused’.

Arsenal are one of those known to be keen, and on the market, there is a ‘strong suspicion’ that they would like to acquire him this summer. Whether they’d pay such a price isn’t mentioned. 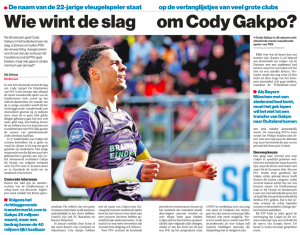 Gakpo personally knows there is interest in him as two clubs with ‘very concrete interest’ recently contacted his manager, although those clubs are not named specifically.

The newspaper does argue, though, that Arsenal ‘might be an excellent route’ for the 22-year-old as he would be guaranteed playing time.

The fact they don’t have confirmed European football is an issue, though, particularly with PSV anticipating bidders from the elite level.

One key aspect could be the playing time, though, with Netherlands coach Louis van Gaal admitting he’s made that clear to the player.

“He’s played in striker a few times, but it didn’t fare so well for him,” Voetbal International report him saying.

“I had a conversation with him about where he could play, and we discussed that. That will remain private for now, but there are positions I think he can play there.

“That depends on his development and his form, because it is not the case that you get a place in the Dutch national team without showing that form.”

The decision will seemingly be Gakpo’s but Arsenal are in the picture nonetheless, although whether they’ll be willing to match PSV’s high asking price remains to be seen.