There are several stories in the Spanish media every week pointing out Antonio Conte is still very keen to sign Alvaro Morata for Chelsea. The now Premier League champions made an approach for Morata during the last summer transfer window, which is something the Spanish striker has confirmed himself more than once.

Without the leading role at Real Madrid that he would like, Morata is continually linked with leaving in the next window.

Less than a week ago Marca explained that whilst Conte ‘insists’ Chelsea make the signing this summer, it would be ‘unforgivable’ for Real Madrid to let the striker go, especially because there aren’t many alternatives available on the market.

On Sunday, as Real Madrid beat Sevilla 4-1, Morata was brought off the pitch and clapped the Bernabeu fans. It wasn’t quite as pronounced as James Rodriguez, but Sport still 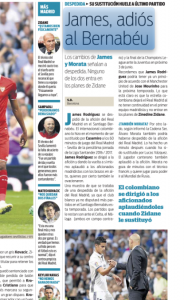 believe the player’s action ‘signals farewell’ to Madrid for the second time.

Of course, Sport are a Catalan newspaper, and they’d like nothing more in this scenario than for Morata to join Chelsea and do well, and Real Madrid to regret it for the next half decade.

If it was adios, then Antonio Conte will be waiting with open arms at Chelsea for Alvaro Morata.