Chelsea agreed a deal with Ajax for Hakim Ziyech on February 14th and the winger will be the Blues’ first new addition for more than a year.

The Netherlands-born Morocco international moved to SC Heerenveen’s academy in 2007 and after spending five seasons in the youth system, he made it to the senior team in 2012.

Ziyech spent two years with Heerenveen’s first team and in his final season he managed nine goals and 10 assists in the league.

In the same season, his then teammate Alfreð Finnbogason had 29 goals and 10 assists to his name. The Icelandic striker has given an interview to De Telegraaf and explained what Chelsea strikers can expect from his former teammate.

“And I already knew he was good, didn’t I. But what he has shown in recent years is not normal. If you don’t click with Ziyech, you are not a good striker. All you have to do is move. He gives the balls exactly the way you want them to be.

“Without a doubt, the Premier League will be a big test for him. Players are better and more aggressive, but see what he has already shown at Ajax with his qualities in the Champions League. He is something special and will be a big signing for Chelsea.”

“The pressure will be great, but he can deliver. He is no longer a young boy either, knows how it works.” 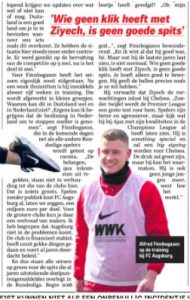 At Stamford Bridge, Ziyech will be responsible for giving service to the likes of Tammy Abraham, Olivier Giroud or any striker who arrive in the summer, and Finnbogason believes they should be looking forward to it.

Man City pursuing player with a ‘mad and suffocating pressing’ –...