It looks like it didn’t take very long for Norwich City and Porto to find a deal for the transfer of Sebastian Soto, as the news about his move to Portugal came all of a sudden.

The Dragons’ agreement to land the 20-year-old was first reported last night by outlet Mais Futebol, and local newspapers bring a few more details on the deal today.

Newspaper Record confirms that Soto is joining Porto on a one-year deal, and now adds that the Portuguese side will have the option to buy the player for only €1m in this period.

The striker will join the club’s B squad at first, but will have his way open to impress manager Sergio Conceição and go up in their ‘elevator’ to the first team.

Record highlights that the Dragons have been looking for young and cheap players, and pinpoints the impressive form that Soto has been having for the United States national team. 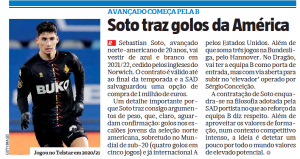 Norwich City signed Soto on a free move from Hannover 96 last summer. They immediately sent him to the Netherlands, where he spent six months on loan at Telstar.

The striker had seven goals in 12 games for the Dutch side and then returned to the Canaries in January. However, he couldn’t find a place in the English side, and could now be leaving the club for good.