Returning from his loan spell at AS Monaco, Islam Slimani was meant to find himself a new club this transfer window, but that didn’t happen.

Even on deadline day, rumours about an exit were hard to find, with very weak claims of Torino being interested and Sporting CP thinking about bringing him back, ten months after teams like Tottenham and Manchester United were attempting to sign him midway through the season.

Leicester City were even prepared to cancel his contract and let him go on a free to make something happen, but it never did, and now the Algeria international is stuck at King Power Stadium where he’ll have a very difficult time convincing Brendan Rodgers to use him.

It’s a very strange situation for a player who showed exactly what he was capable of when playing regularly at the principality side, and the player gave an interview about it all in this week’s edition of France Football.

Focusing mainly on his spell at Monaco, the chat touches upon his form in the early stages of last season that made him a prime target for clubs such as Tottenham in a January transfer window where Spurs were scrambling around for a new striker. 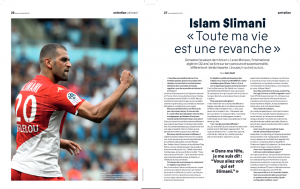 They never signed one, but Slimani revealed their Portuguese manager personally reached out to him to talk about a move, one that would have needed his loan to be cancelled.

He said: “In the space of six months, I went from the nightmare at Fenerbahçe to a phone call from José Mourinho who wanted to sign me. It shows that I worked well. Knowing that your profile is appreciated gives you strength and confidence”.

Tottenham were still looking for a striker this summer, but with more time and money on their hands, they decided to look elsewhere, eventually signing Carlos Vinícius from Benfica on loan with a view to buy.