Home Europe Strange claims of Tottenham ‘official offer’ for 19-year-old to be made ‘next...
SHARE

Normally, when Gazzetta dello Sport have a story in their newspaper and it isn’t theirs, they let you know.

If it’s from England, they would write ‘according to the British media’ or ‘in England’, but in the case of Tottenham’s interest in Nicolo Zaniolo, which was already touched upon on Tuesday by Corriere dello Sport, they remain fairly vague.

The Italian newspaper state that the news surrounding the young midfielder and Spurs’ desire to sign him comes from an unnamed ‘radiomercato’ (which roughly translates to ‘transfer window radio’) without giving any more detail, but if you believe what this/these mysterious source(s) have to say, it’s quite exciting.

While Corriere stated Tottenham were ‘offering €55m’ for Zaniolo in general, without making it clear whether the bid had been made or not, Gazzetta and the radiomercato ‘ensure’ that Daniel Levy and co. will put in an ‘official offer’ for the 19-year-old ‘next week’. 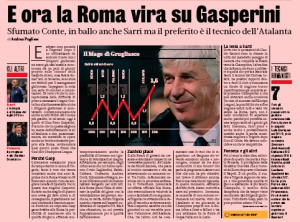 The amount isn’t stated, but considering the fees being talked about are in the €50m range, that’s where you would think the London club should have to start negotiating from.

Now that we have some sort of timeframe, we will see how correct this mysterious radiomercato is, as it’s unlike Gazzetta to use other Italian sources in their articles.