When Ruben Neves started captaining Porto at the age of 18, it seemed like he had everything to become a star at the club. After coming from the Dragons’ academy, the midfielder proved himself at the professional level, looking like he had potential to become a world class player, and that’s when links with other sides started.

But Porto decided to change managers in the summer of 2015, and since then, Neves’ career hasn’t been the same. For over a season now, the player has been struggling to earn his place back in the starting team, and his name disappeared from the papers for a while.

That’s why it’s a little odd to see a big story about him today, in which he’s linked to Chelsea and Liverpool. It’s A Bola who publish the article, saying the midfielder’s departure to England is ‘more than likely’. 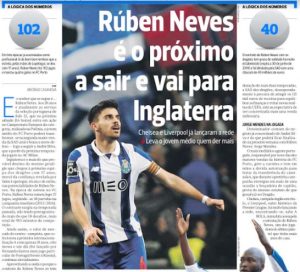 As the same story explains, Porto are desperate to reach €115m with summer sales so they won’t have problems with financial fair play, and that’s why they won’t think twice before selling Neves.

Chelsea and Liverpool are mentioned as the only possibilities, and it’s claimed that whoever makes a better bid will take him. The player’s agent Jorge Mendes is in charge of the transfer, and is the one mediating the ‘fight’.

A fight which we’re not buying for now, but if Liverpool or Chelsea do want the player, and he could be a great project for Jurgen Klopp, then they should be able to get him.