Home Europe Stoke continuing to pay player €150k a month, despite him not being...
SHARE

Tuesday’s edition of L’Equipe has a feature on the wages paid by Ligue 1 clubs. Neymar is of course way out in front, paid €3m a month before tax, but there’s a lot of players further down the league who struggle to make what would be pocket change for the Brazilian.

Three of the top 12 earners at Amiens bring in €2.8k per month before tax, and only one player at the club earns over €25k per month.

At Toulouse the wages are rather higher, with all the top earners on €60k per month or more. Way out in front is Giannelli Imbula, with Toulouse paying the Stoke City loanee €150k per month.

But that’s not all, Stoke City are also paying Imbula €150k per month, taking his total wage to €300k per month, which is the same as Nabil Fekir gets paid at Lyon.

Imbula’s time at Toulouse hasn’t been great, with some poor form around September leading to a series of articles in France explaining just what a flop he’d turned out to be. 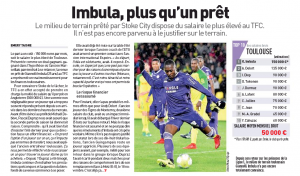 Things have levelled out, just a little, for the Stoke owned player since and according to WhoScored he’s Toulouse’s 7th best player so far this season.

That’s likely not the return they expected from making him their best paid player, without even taking the extra Stoke money into account.

L’Equipe make it clear there’s very mixed feelings at Toulouse over the success of the loan.