Fanatik claim Watford and Stoke City are showing a serious interest in Elazığspor midfielder Hamidou Traore.  The 20-year-old Mali international plays in the Turkish second tier and has been with the club since 2014/15.

Traore has been an ever present for Elazığspor this season and he’s showing he needs to make the next step in his career. The midfielder has impressed for the Turkish side in this campaign, which has brought him to the attention of Watford and Stoke City.

The player has also received attention from a host of Turkish Super League clubs including Trabzonspor, Başakşehir and Konyaspor. All three clubs have scouted the youngster this season, and subsequently the two Premier League sides will face stiff competition. 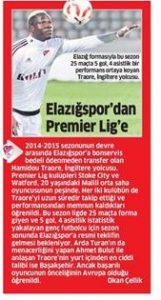 Fanatik say Elazığspor are willing to listen offers for their star player because of financial difficulties, and Stoke City or Watford could look to take advantage.

Elazığspor expects bids from Premier League clubs at the end of the season, but it’s unknown what fee they will be demanding.

Traore is contracted to Elazığspor until 2019.