Home Europe Stoke City only want to do transfer at €10m, compromise would be...
SHARE 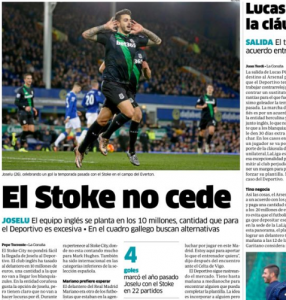 The Spanish side are looking for a replacement for Lucas Perez, and are keen on the Germany born striker.

According to a latest report from Marca, Stoke City have put up a price tag of €10m on Joselu, but Deportivo La Coruna aren’t going to match that.

Deportivo are not really keen on overpaying for the 26-year-old. Marca, however, haven’t ruled out the transfer yet, as they suggest things could change before the transfer deadline.

Joselu currently has only one offer on the table, and that is from Deportivo. Marca say Stoke City could lower their asking price, but that’s just speculation.

The 26-year-old signed for Stoke City at the start of last season in a €8m deal from Bundesliga side Hannover, and managed to score 4 goals in 22 league appearances.