Bojan Krkic is being edged out of Alaves, report Mundo Deportivo.

Alaves are trying to offload several players during the winter transfer window, with a sudden panic over the wage bill being too high. The club want to get some high earners out and replace them with players who, despite being paid less, it’s hoped would help the team more.

Bojan arrived at Alaves in the summer on a season long loan from Stoke City, and has only started 3 La Liga matches since, without a single goal or assist to show for it.

He’s now being kept out of selection because of the club’s decision to try and offload him. Bojan isn’t thrilled with his treatment and Mundo Deportivo say he’s had a ‘tense conversation’ with the club’s director of sport.

Alaves are currently 17th in La Liga, so, just like Stoke City, have serious problems. 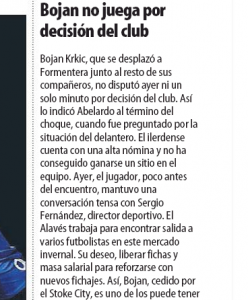 There’s a rather big issue here which Mundo Deportivo fail to mention. Bojan played games for Stoke City this season before being loaned to Alaves, which means he can’t now play for a third club during the current campaign.

The only way he leaves Alaves is to return to Stoke, that’s the only other club he can play for.

FIFA registration rules dictate that whilst a player can be registered at three clubs a season, he can only play for two of them.