Voetbal International are excellent at interviews.

They travel around Europe to speak to Dutch footballers playing outside the country, and often produce the most interesting reads.

The Dutchman signed for Stoke City in the summer 2016 transfer window, originally on loan from FC Porto. An agreement was later found to make the move permanent, but then Martins Indi was one of a number of players expected to leave when Stoke were relegated from the Premier League.

He didn’t, and wasn’t prepared to kick and scream to try and find a way out. Indeed, Martins Indi has explained to Voetbal International that he felt he owed something to the now Championship club, despite facing a pay-cut, and that the experience could ultimately benefit him.

Having a chat with the Dutch magazine, at Pep Guardiola’s restaurant in Manchester, the defender explained: “I had signed with Stoke City for five years, but in my first season I got seriously injured and the club were relegated. Is it fair to immediately arrange a departure? My mind said: Go. My heart said: Can you do it?

“Did I have the right to bang my fist on the table after a season in which I was barely able to perform due to injuries? You are flung back and forth between those two thoughts. I finally decided to stay. I am not a runaway anyway, I prefer to fight through the Championship. You know, I just didn’t like that relegation. I had never been relegated.

“I have experienced everything in football: World Cup with Oranje, Eredivisie, Portuguese league, Premier League and now also the Championship. Different world, but is it bad by definition? Now I suddenly run into other things: lower level, different players, different expectations. Boys who fight hard for less money to get somewhere. It’s good to experience that. I too have had a money drop: the relegation made me earn less. But I do get something in return: experiences, and those are ultimately priceless. I embraced the whole situation and decided to get the best out of it.”

Asked what he’s really getting from it, the Stoke player said: “Perhaps the best thing that you can achieve as a footballer, regardless of prices, status and honour: the respect of the people. They appreciated that I didn’t kick off to get away. In my experience, you do not only play football for yourself, but also for the people. I want to inspire them with my game and also with my behaviour.”

On a lower standard of football making him a better defender, Martins Indi said: “Completely. I used to have those moments of: Ah, dude, I’ll be fine. And then suddenly: cross, goal. Those moments have now completely disappeared from my game.”

On the change in his life since making it as a professional footballer, the 27 year old talked about balance, and then ended by saying: “I am and I always will be a carpenter.”

Voetbal International replied with: “What?”

So Bruno explained: “A friend of mine once said: Bruno, you are and will always be a carpenter.

“I also did not understand what he meant by it, but he explained it. Carpenters are sober, hard workers, not whining, always continuing. And what you get in return is craftsmanship. I really want to be someone like that. I now work at Stoke in the Championship, without problems, because everyone is happy with me. But we can no longer get promoted and my own ambitions are still great. I am convinced that a good carpenter is needed somewhere at the highest level.”

It sounds like Stoke City’s carpenter is ready to pack up his tools and move on to the next job. 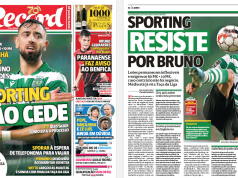