It’s been reported by Turkish website Mynet that Afobe will undergo medical today and he will then sign an official contract.

Yesterday it was reported in Turkey that the Super Lig side will loan the player from Stoke City for a fee believed to be in the region of €100K.

In addition, Turkish newspaper Cumhuriyet claim Trabzonspor boss Eddie Newton was behind the pursuit of the former Arsenal striker. 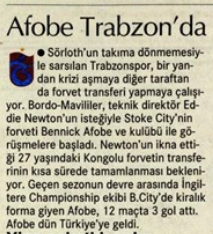 With Alexander Sörloth refusing to return to the city as he wants to leave, Newton was offered the Stoke City man.

Cumhuriyet say Trabzonspor are now on their way to signing him on a season long loan deal.

Afobe had a loan spell at Bristol City last season and he scored three goals in 12 appearances. The player is under contract at Stoke City until the end of next season.