Despite having made 22 appearances for Stoke City in the first half of the season, Erik Pieters was sent out on loan for the remainder of the current campaign.

Stoke are currently 15th in the Championship and not looking good for a quick return to the Premier League, so getting some wages off the bill may well have been a consideration in the case of Pieters and others.

However, in France there’s a claim Stoke won’t be avoiding the Pieters wage, or at least the majority of it.

Each year L’Equipe release their Ligue 1 wages list. And whilst some of the headline claims are usually contested, it’s the detail further down the league which is often most interesting.

When it comes to Amiens, L’Equipe explains the club negotiated some good deals on 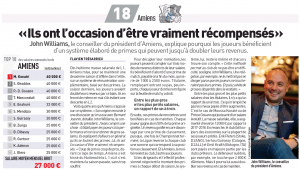 loans: ‘The club saves on most of their loaned players. Erik Pieters (Stoke, D 2 ANG), Serhou Guirassy (Cologne, D 2 ALL) and Emil Krafth (Bologna, ITA) are mostly paid by the lending clubs.’

This may be balanced off by a loan fee, but there’s no explanation on that from the French newspaper’s report today.