Thanks to goals from James Tavernier, Alfredo Morelos and Brandon Barker they eased past Livingstone 3-1.

After that, all Rangers eyes will have turned to Feyenoord and their match against ADO Den Haag. Goals from Rick Karsdorp, Luciano Narsingh and Leroy Fer helped the Rotterdam club to a 3-2 victory, yet perhaps the bigger story in the Netherlands is the return of Nicolai Jorgensen.

Picking a knee injury in July, he came on for his first appearance of the season. De Telegraaf reports it had been expected the forward may get five minutes at the end, to give him a chance of playing against Rangers this week in the Europa League.

Instead he got around half an hour, which provides a much better chance of lining up against Gerrard’s side on Thursday.

The 28 year old enjoyed a standing ovation when he entered the pitch, and it certainly touched him: “I could go to another club, but I secretly hoped for this chance (longer contract) At Feyenoord. I have a great feeling about this club. It would be difficult to 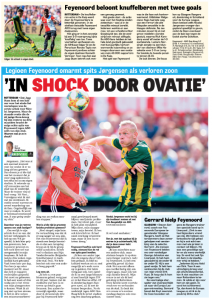 leave not only in terms of football, but also in terms of my family. My wife is very happy in Rotterdam, just like me. Our family is constantly coming over and we love the city. I think that is why my wife thought my return today was also emotional.”

There’s much Dutch anticipation ahead of the Rangers match, and the reunion of former Liverpool teammates Steven Gerrard and Dirk Kuyt is adding an extra aspect to it.