The player and his representatives have been the subject of criticism in the Dutch media over the past few days, and were given an opportunity to give their own side of the story, without any pressure or tough questioning being applied.

De Telegraaf have got their reward, and the front page of today’s sport section shows Bergwijn holding a Tottenham shirt aloft.

Inside he’s pictured with Jose Mourinho, and it’s all part of the exclusive access the Netherlands newspaper has been given.

Bergiwjn has signed a contract with Spurs, and spent his first day there yesterday. He’s said to feel very at home already. 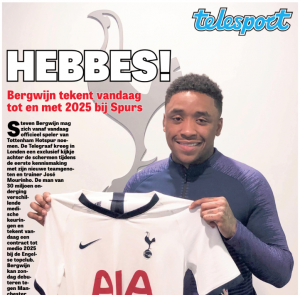 De Telegraaf flew out with the Bergwijn entourage on Tuesday morning from Amsterdam. Having arrived at Luton Airport on a private jet, the club then arranged a taxi to the Tottenham training centre.

Jose Mourinho arrived, smiling and ready to chat, and then Bergwijn shared some words with the newspaper.

He’s quoted as saying: “I have always looked up to a top coach like Mourinho. And now I’m going to play for him. It’s great to be here. Just look at the facilities around us. When I play on the Playstation Fifa, I almost always choose a team from the Premier League. I look forward to playing in that great atmosphere. 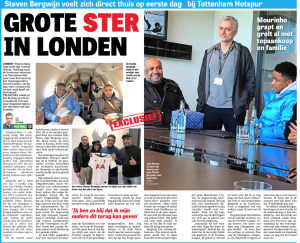 “Of course it will take some getting used to, but it will all be alright. I think that my physical match is also good in the Premier League. I believe in myself and I really know that I am not there yet. Of course I have played many matches in the Eredivisie. England is a bit different, but I know what I can do.”