Celtic face AC Milan this week in the Europa League, and the match is inevitably getting coverage in the Italian media.

Gazzetta dello Sport have taken a special interest in Celtic’s loss to Rangers at the weekend, and see it as ‘good news’ for Milan. They state ‘statistical data nails Neil Lennon’s team’, after they failed to have a shot on target against Steven Gerrard’s Rangers.

Connor Goldson headed in a free-kick from James Tavernier, and then doubled Rangers lead in the second half.

Gazzetta weren’t impressed with Celtic, and say Scott Brown was ‘slow’, and Mohamed Elyounoussi was ‘a ghost’. The insinuation is that the loss to Rangers shows Celtic are on something of a slide, with Gerrard’s club winning the Scottish Premiership now a real possibility. 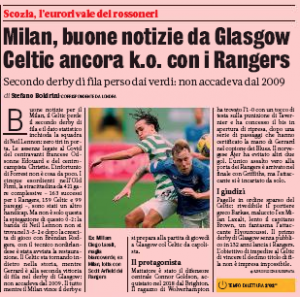 Rangers are four points ahead in the table, having played a game more than their Glasgow rivals. In contrast, Milan beat their local rivals Inter 2-1 at the weekend, and are top of Serie A after a flawless start to the league season.