Manchester United haven’t been having the best time recently, so their victory over Atalanta in the Champions League this week took some of the pressure off Ole Gunnar Solskjaer.

The manager’s position had been heavily questioned by some, especially on social media, and a number of alternatives have been linked with the position in recent weeks.

Pressure is very much back on this weekend, with Liverpool travelling to Old Trafford for the big Premier League clash of the weekend.

Should Manchester United win then they’ll be just a point behind Jurgen Klopp’s side after nine matches. However, should they lose then they’ll be seven points behind and will likely drop from their current position of sixth.

It’s high stakes, and it’s certain that should a loss come then the managerial rumours will be given a boost. One of the men recently linked is Zinedine Zidane, and whilst some in France have scoffed at the idea of the manager moving to England, the claims continue.

Saturday’s edition of Marca says Zidane is attracting interest from clubs, ‘starting with Manchester United’. No other side is mentioned. 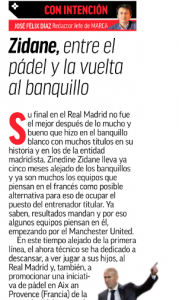 The Spanish newspaper explains the Frenchman is currently enjoying his time off to the maximum and doesn’t seem overly desperate to return to the game. Therefore, should the call come, he’ll have to make a decision whether to leave his life of leisure, and unlimited time with family, behind him.

That Marca are even putting the question out there, and their headline reads ‘Zidane, between the padel (he’s opened a padel tennis centre in Aix-en-Provence) and the return to the bench’, suggests it wouldn’t be an easy decision.