The João Félix saga has got to a stage where we haven’t seen many developments, and Portuguese newspapers are starting to disagree about the latest movements.

For a while the local media has been claiming that the likes of Manchester City and Manchester United are ready to pay €120m for the Benfica star, but now each outlet says different things.

Today we have a good example of it. Starting with Record, they say Antoine Griezmann’s departure from Atletico Madrid opens a door for Félix.

The Colchoneros have been after the player for a while, and it’s claimed that it’s an ‘attractive scenario’ for him. 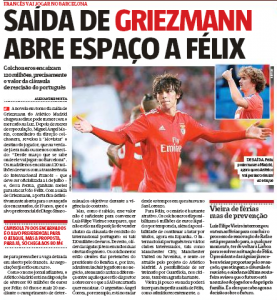 Regarding the negotiations with Benfica, even though Atletico are only offering €80m including bonuses, it’s said the inclusion of players in the deal could convince the Eagles.

Record claims that the other clubs who are interested in him are Manchester City, Manchester United and Juventus. Pep Guardiola’s side get a special mention, since being trained by the Catalan manager is an option he would like.

Now Correio da Manhã has a different take, sounding pretty sceptical that Atletico Madrid would be able to land Félix this summer.

They say the club does not ‘seduce him’, since the project isn’t attractive enough. It’s claimed that Félix would rather play for Real Madrid or one of the two Manchester clubs.

Correio da Manhã also claims that Atletico Madrid are only offering €80m, while the three other sides are ready to pay the €120m release clause.

So we really got to a point where you have to choose who to believe. But it looks certain that for now, there isn’t a club who is really close to finishing a deal for the 19-year-old.