Home Europe Star ‘will not play again’ for club, transfer to West Brom to...
SHARE 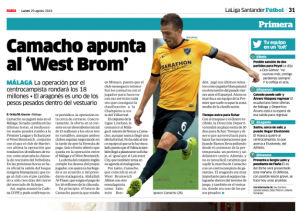 If everything goes right, Malaga’s Ignacio Camacho will be a West Brom player soon, reports Marca.

Marca say Camacho ‘will not play again’ for Malaga, and his departure will be made official in the next few hours.

West Bromwich have agreed a fee of €15m plus €3m in bonuses for Camacho. It’s reported both the clubs are trying to figure out the payment structure after which Camacho will move to the Premier League club.

Camacho has a €18m release clause in his contract, and West Bromwich in a way have agreed to pay the amount to Malaga. The Spanish midfielder has already agreed a contract with West Bromwich.

AS Monaco were also interested in Camacho, but never made a formal offer, whilst Leicester City were also keen on signing him.

However, it now appears West Brom have acted quickly and are close to making an impressive signing.