To say Jose Mourinho’s arrival in Croatia caused a stir is an understatement. The Manchester United manager had photographers following him around and created a buzz in not just the sport media, but generally.

Croatian newspaper 24Sata give Mourinho’s trip a full page in their Saturday edition and they, like others, are convinced the purpose of the city break is Ivan Perisic.

24Sata kick off their article by saying: ‘He landed at 11.15 in a private plane and went to a Zagreb hotel. The famous Jose Mourinho, the third time he came to Zagreb, this time because of Ivan Perisic.’

Mourinho talked ‘face to face’ with ‘one of the most sought after attackers’ around, explain the newspaper. It’s claimed negotiations for the player to join Manchester United are at their ‘final stage’, hence Mourinho making the trip to speak to Perisic personally.

The Inter Milan player will get other offers, if the Croatian reports are to be believed, but given the persuasiveness of Mourinho, 24Sata say it’s now ‘expected’ Perisic will end up at Manchester United. 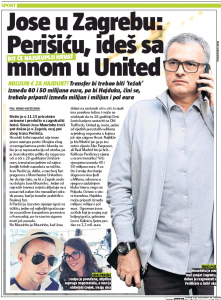 The estimated price is shooting up, and now stands at €40m to €50m, a lot for a 28 year old who, regardless of reason, isn’t really a world star.

Inter Milan are not known for being amazing at transfers. They’ve let players go they shouldn’t have, for fees which should have been higher, and they’re like a magpie always looking for the next shiny new thing.

Had Manchester United managed to keep this one on the quiet then a deal at a reasonable price would have been possible, but, if Perisic is the target, it’s not exactly a secret any longer.

Over to Italy, and Gazzetta dello Sport have their own take. Manchester United are ready to put €40m on the table, claim Gazzetta, which is a reasonable offer for Perisic. However, Inter Milan are said to be building up a wall around the player and won’t sell unless they get an indecent offer. 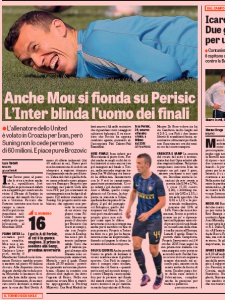 In this case it’s believed something starting at around €60m would be indecent enough. The Italian newspaper explain Inter would much rather sell Marcelo Brozovic, a player they’re happy to see leave for as little as €25m.

Should a Brozovic exit go the way some other Inter sales have then they’ll get something like €20m and in a couple of years the 24 year old Croatian midfielder will be worth double.

Using Matteo Darmian as part of any potential offer isn’t a bad idea, with Inter Milan strongly linked to the player since the summer. It would allow the Italian club to fudge the headline figure of transfer fee received and make the total package sound more impressive than it actually is.

It’s time for Ed Woodward to pick up the telephone.

No, would a Brozovic take your fancy?

Not really, but we’ve got a 27 year old Italian right back lying around in the stockroom, you keen?

Matteo, nice lad, looks like a young John Lennon, just not what we want. Him and €35m for Perisic, what do you say?